Muay Thai, Muay Bora, Thai Boxing. Bangkok is the cradle of a culture of performance. 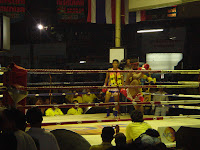 Thailand is the mythic Siam, Bangkok its capital since the 17th century, and its people, the ‘Thais’ a world in itself: they’re a proud people because they are clean of any foreigner invasions and because they have preserved their unique cultural manifestations. Performing arts are an essential part of this preseved legacy: Dance (Lakhon), Theatre (Kohn), Shadow theatre (Nang yai), Puppet theatre, and their impressive martial art, Muay Thai. Obviously, in the source of martial arts there is no performing art but just martial action. However, time has made this very special fight form into a successful spectacle among the other performing arts created by Thai people. I went to Lumphini Stadium in Bangkok to feel, as a spectator, this impressive perfoming art, and it didn’t disappoint me.
Lumphini Stadium is one of the meccas of Muay Thai, crowds of Thais and foreigners go there to yell, to bet and to live a night full of excitement, whose only source is the ring/stage. Like in the ancient theatres and spectacles from Asia and Europe, life in this places is unpredictable: there are explosions of energy everywhere, there is movement, music, food, money, exitement, and the drama stemming from the fight, from the action itself. Fighters here are stars, they know they are seen by thousands, they are attractive, seductive, they have studied every movement made inside the ring; they hold the public in their hand, to win means to get fame and money, but the pinnacle of their whole professional life lays on the ring/stage, moments before, during, and moments immediately after the fight, the apex maximum is the lapse where drama occurs.

The Western world knows Muay Thai as a Thai Boxing, a kind of fighting style that has become an international and regulated event, sport and TV spectacle. However, many of its ancient traditional rules remain at its base: their ancient training techniques, the ritual aspect thatmany fighters opt not to perform,yet which requires they show respect for their masters through one ritual dance, called Wai Kru. During the whole event traditonal music is played with ancient Thai instruments, and the fighters keep in mind a strict ethic-religious (buddhist) code in their behavior on the ring. But, those strong links with the traditional past notwithstanding, commercialization, ratings and money itself have provoked a lax attitude and fighters have lost many of those links. To avoid that, groups of purists have retaken the ancient model of this martial art, Muay Boran, which literally means ‘ancient fight’. Muay Boran doesn’t use the international boxing rules, but the basic ancient ones; it could become a brutal fight, but buddhist behavior is still present, as well as Wai Kru (dance), costumes (if they can be called that), music, rules… It’s a comprehensive ritual in the middle of the 21st century arena.
There are some Muay Boran competitions year long, but usually unknown to the masses; Muay Boran is specially ‘performed’ in the main venues every night as a demonstration of a national treasure. Imagine yourself in the midst of a crowded stadiums with TV crews, people yelling and betting, eating, searching for a better view, even jumping in excitement, and two traditional fighters dancing and fighting as their ancestors did.
The night of December 8th 2006 i had the opportunity to see and feel one of these impressive fights along with the usual Muay Thai. I took a video and some photographs, which I think are the best way of sharing this unique experience.

Slideshow of photographs from December 8th, 2007 at Lumpini Stadium.

Muay Boran video (not edited): ritual dance (Wai Kru) and one fight full of strength and surprises.
Muay Thai video: one spectacle in itself. The public yells at the rythm of the beats.
These sites contain a lot of information about the history, rules and fighters of this martial art. The last link is a French site with an interview with an anthropologist who joined as a Muay Thai fighter and who talks about the ritual and religious aspects of this martial art.
http://www.muaythai.com/
http://www.bangkok-city.com/muaythai.htm
http://www.wmtc.nu/html/wmc03_mthist.html
http://www.horizonmuaythai.com/history.html
http://www.eurasie.net/webzine/article.php3?id_article=460
Posted by Gustavo Thomas at Wednesday, March 14, 2007 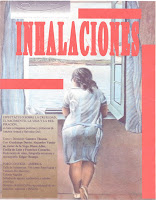 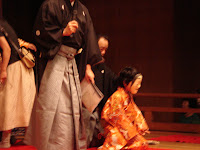 On Saturday July 29th 2006, in Kyoto, Kanze Seinen Kenyu Nō (1) presented a special Nō appreciation event at Kanze Kaikan (Kanze theatre). It was summer and children were on holidays, it was a good opportunity to reach and to teach them how to appreciate Nō theatre in a practical way. The next day the same company would perform a full 6 hour long session of Nō and Kyogen. (2)

The program of the Saturday appreciation event read: ‘Young performers will give a demostration of Tamoe, Ikkaku sennin, and Tsuchigumo, as well an explanation on costumes and a small lesson of Nō performance.’ Tickets cost ¥1,500 (¥1000 for students). (3)
From 10:00 am to 2:00 pm entire families, in a Theatre full to capacity, amused themselves while learning about one of their most precious national treasures.
As I wasn’t able to understand Japanese I decided only to record on video some scenes of the demostration and some part of the explanations and lessons. I’ve always thought that’s the best way to share online my visit experience .

This was the event’s schedule: 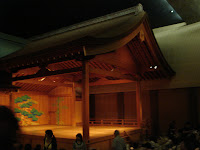 As the organiser asked, we arrived at 9:30, yet the whole theatre was already full of people. Most of them were children but there were also old people.

They started on time and presented part of three plays, with explanations about movements, ways of singing and stories. 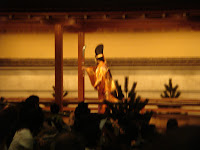 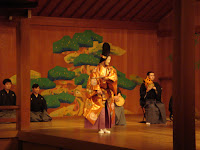 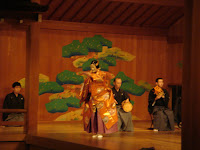 The video shows one of the Nō players performing a whole scene without a costume, which helped explain the choreography and the perfection of the details. (4) 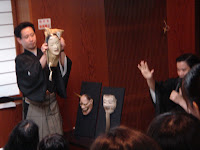 The hall was divided into four sections for the explanations: one for costumes, one for masks, and another one for texts. As all of them were done in japanese, so I decided to enter the theatre and see what was going on inside.

Theatre stage: lesson on how to wear a costume, mask, and on walking with them on. 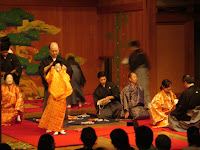 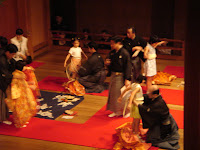 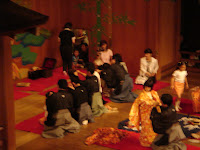 These are extremely beautiful images of professional Nō players dressing up children with real costumes and masks and showing them the right way to walk wearing that on stage. 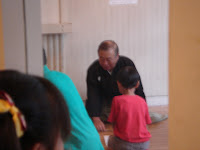 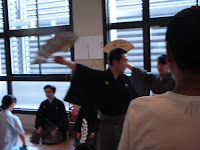 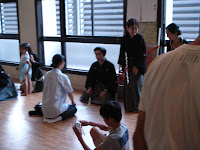 People were happy and excited waiting their turn for the small personalised lessons on singing, dance and dialogues; I say personalised, because Nō has only one way of teaching its acting: from master to student, one on one.

At that moment, Nō had become a family experience, an entertainment, and an exceptional way for one strange meeting: the common people of our age with a refined traditional performing art.

Slideshow of photographs of Costume, Masks, Fan and Recitation Workshops.

(1) Kanze Seinen Kenyu Nō is the Nō company in charge of managing the Kanze theatre. As many other Japanese theatre companies its structure of power consists mainly of a big family, recognised for centuries, though today some parts of this structure have changed and some non-family members can be accepted.
(2) See post of 21th of february, 2007:
http://gthomastheatre.blogspot.com/2007/02/kanze-seinen-nekyu-n-three-n-plays-and.html
There I give detailed information about that performance, including a sinopsis, video and photographs.
(3) Of course, I didn’t translate the theatre brochure, I took one extract from a note inside an English language magazine. About the costs of tickets, I could get a student discount thanks to my chinese Qinghua university ID card.
(4) It’s a pity I lost the other part of the video where the same player shows the same movement and choreography with the whole Nō costume.
(5) That way of giving the explanation and lesson was not problematic at all, it was even exciting, as it created a brilliant work dynamic where everyone could do something, wherever you went you’d find somehting interesting to learn. It was a kind of No carnival, joyful and noisy. A fantastic experience.


(1) After La Cura these three actors and two more enthusiasts joined me in a new project called Esferica Ludens, Compañía de Arte Representacional which lasted till 2005 and is one important part of my artistic life.
(2) José Enrique Gorlero: friend, poet, playwright, theater director and light designer born in Buenos Aires, Argentina who lived in Mexico since 1975 till his death some months before La Cura’s season.
(3) This review was made by a writer who used words in such a way I can’t offer a translation that does it justice.
Posted by Gustavo Thomas at Saturday, March 03, 2007 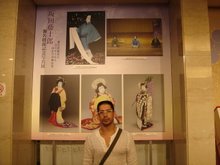 Gustavo Thomas Theatre by Gustavo Thomas is licensed under a Creative Commons Attribution-Noncommercial-No Derivative Works 3.0 Unported License.
Based on a work at gustavothomastheatre.blogspot.com. 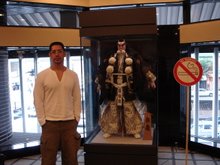